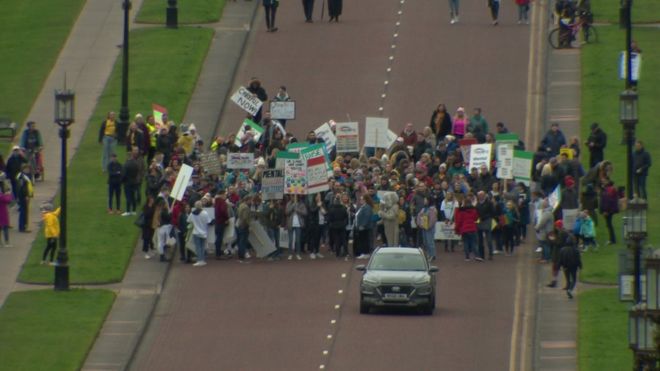 In January, young people gathered at a rally in Belfast City Centre to call for better support for young people suffering with mental health issues. As part of the rally, better education in classrooms was a key talking point with dozens of high-profile figures calling for Stormont to declare public health emergency around Mental Health.

Northern Ireland has long battled with mental health concerns, which have been increasing over the years. The recent gatherings have asked for the government to double their spend on supporting sufferers of various mental health conditions.

Organised by three friends from across the city, Helena Palmer, Jonny Collins and Chloe Murphy said they want action to help the ” growing epidemic”.

Helena, 22, told Belfast Live: “We were just talking about it one day, how there is an epidemic of suicide and how many people we know who are suffering now and can’t get help.

“Every time someone does die through suicide, all you see throughout your news feed is calls for change, so we just wanted to help that call by organising a rally. We created the protest Facebook group and it blew up.

“We really didn’t expect it to be as popular, but we have had such amazing support from everyone and can’t give thanks enough to anyone who attended, or helped to organise the day.

“Everybody has been really great. We held a raffle a few weeks ago and the money raised from that went towards insurance and stuff for today and then whatever we have left is going to be donated to local mental health charities.”

The West Belfast woman went on to say how delighted they were with the turn out.